The Netherlands, or Holland, is a relatively small country but it has so many successful international brands that it makes you wonder what the reasons are for this phenomenon. So let’s see how come Holland has so many strong brands?

Well, it is generally known that the economy of The Netherlands strongly depends on foreign trade and that it is a European transportation hub, just think of the Port of Rotterdam. But there is more to it.

The Dutch companies extend their presence abroad, they greatly contribute to the European and American economy. Many Dutch businesses have made their impact on education, insurance, and innovative, niche products. Dutch also influenced the development of ASL – American Sign Language.

The Netherlands also is the home of many high-tech and innovative companies. Highly sophisticated marketing allows many Dutch companies to take leadership roles in their fields.

Add to this the openness and pragmatism of the Dutch and you will have the answer to the title question, but let’s take a closer look at the key factors:

Mergers and Acquisitions are very popular strategies among Dutch companies. Acquiring established brands and expanding into low-cost emerging markets is a key strategic tool to drive growth. It counts for both domestic and cross-border transactions. Many businesses (also privately owned) increasingly invest in Asia. 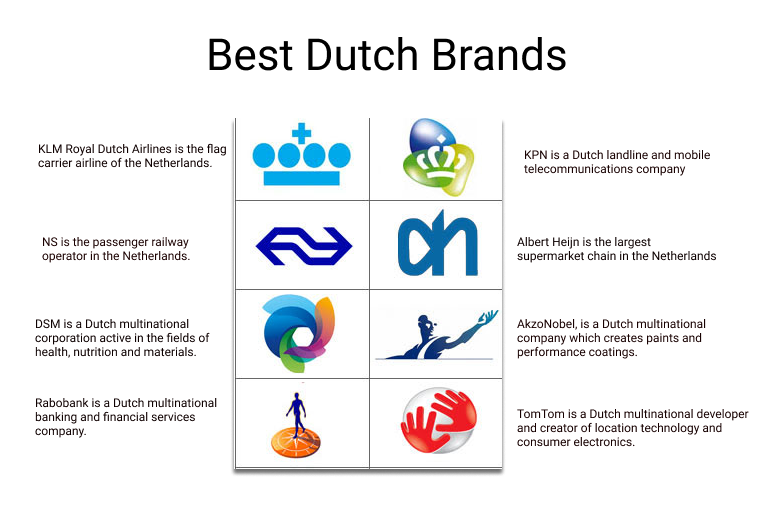 The Dutch understand very well the value of branding and the benefits of coherent marketing. All successful organizations have incorporated branding into their business strategy.

There is a clear understanding that brands create economic value, and there is support from the executive board. Global service offerings and branding are critical competitive tools for most Dutch Top Brands.

Dutch brand owners agree that their brand is one of the most important assets that influence the choices of customers, employees, and investors. Furthermore, it can provide a long-term competitive advantage.  The Dutch adopt the latest developments in branding and marketing very fast and incorporate them into their marketing mix.

The Dutch are Great Negotiators

The Dutch belong to the most professional negotiators in the world, they are organized, well prepared, and understand the pressure of time. They mostly also speak more than one language. The official language of The Netherlands is Dutch.

However, today Holland is probably the most multilingual country in Europe. Already a long time ago the Dutch realized that for a small country speaking foreign languages is key to succeed in trading beyond their borders.

The Dutch economy also benefits from expats, knowledge workers who find the Netherlands an attractive country to live in, mostly because of a great life-work balance. Check out also this post about the role of TenCate, the global Dutch synthetic Fiber Manufacturer, played in realizing the world-famous “Delta Works” that protect the Dutch from floods.